Beef sirloin leftovers, cut into batons and fried in duck fat until browned. Sauce of onions, caramelised then cooked down with chopped chestnut mushrooms and chopped rosemary for 15 mins.  Added splash of sherry and a glug of white wine, reduced and then added rich beef stock and crushed white pepper. Thickened with a little leftover mashed potato.

Parboiled potatoes, cubed and bashed about, drizzled with olive oil and sea salt and roasted for 35 minutes at 210C until browned at the edges.

Garden squash cubed, tossed in a little walnut oil then sprinkled with caraway and cumin seed and roasted foir 45 minutes at 210C. 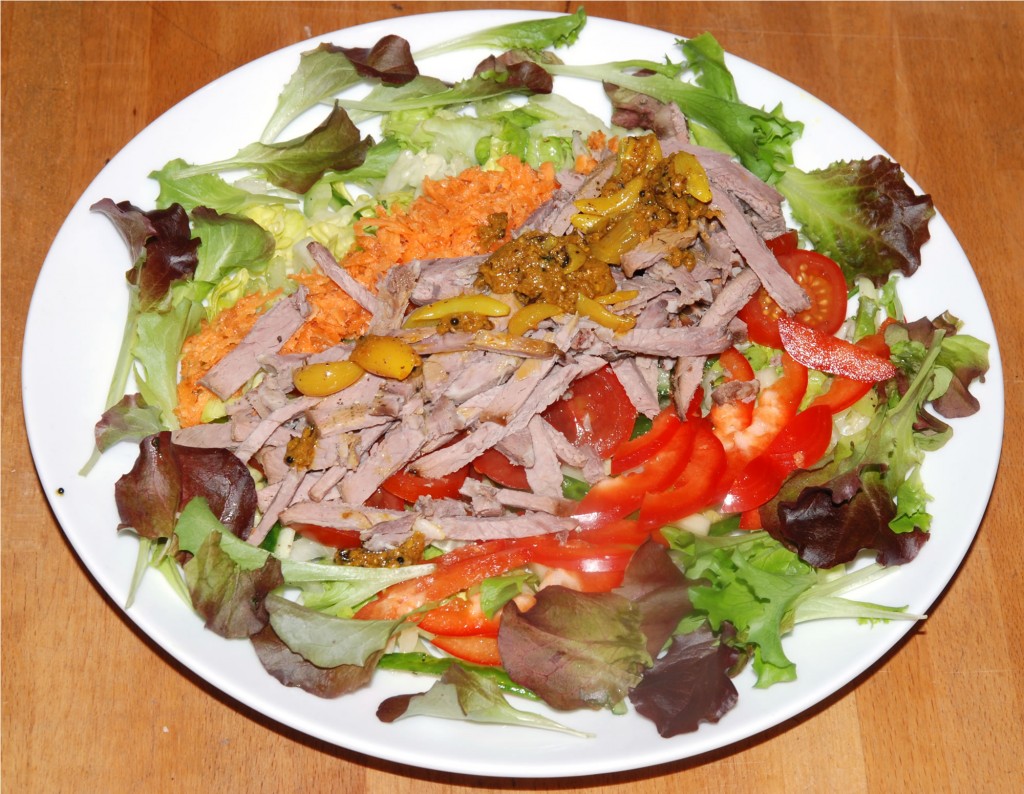 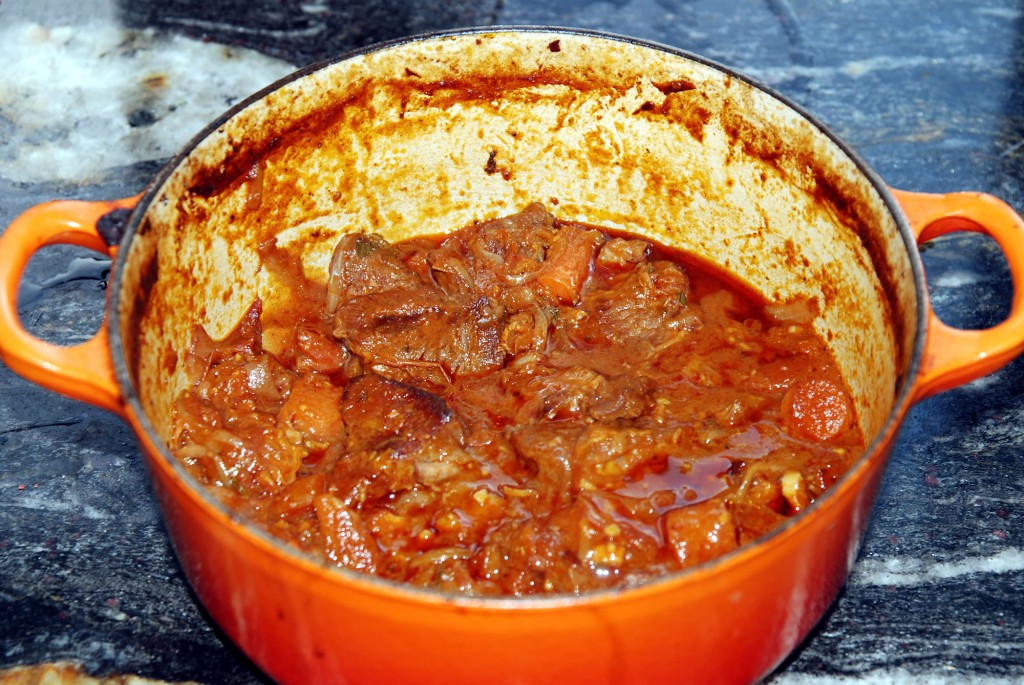 We were in a hurry to eat this so the photo shows the aftermath….

Onions, sliced vertically and fried with crushed garlic and a little olive oil until browned.  Deglazed with a glass and a half of red wine, added frozen cherry tomatoes, lots of fresh thyme and rosemary.

Chunks of braising steak, seasoned then seared in a very hot pan with a little oil, heated to smoking point.  Browned for a minute or so each side then added to the main pan, along with the frying juices.

Reduced for a few minutes to drive off the alcohol.  Added thickly-sliced carrots and topped up with beef stock.  Simmered for 20 minutes then cooked in the oven at 120C for three hours until the meat was tender and on the verge of falling apart but the carrots were still intact.

Butternut squash, cubed and tossed in olive oil, then seasoned and sprinkled with caraway seeds, then roasted until soft in the middle and golden outside. 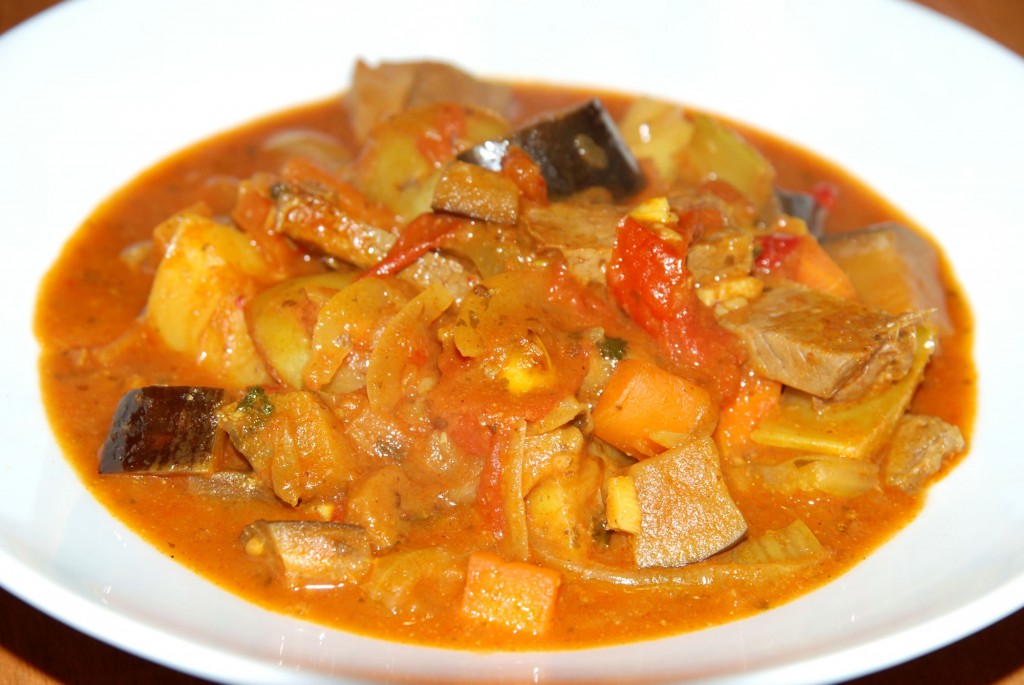 Onions, celery, new potatoes, tomatoes and carrots, cubed and fried in olive oil until taking some colour.  Added cubed aubergine, crushed garlic, chopped root ginger and chopped herbs, cooked for a few more minutes..  Added curry paste (lazy…) and stirred to coat everything well. Deglazed with a splash of wine, then added beef stock.  Simmered until the carrots and potato were nearly cooked and half the fluid had evaporated.  Added strips of cooked beef brisket, cooked a further 10 minutes 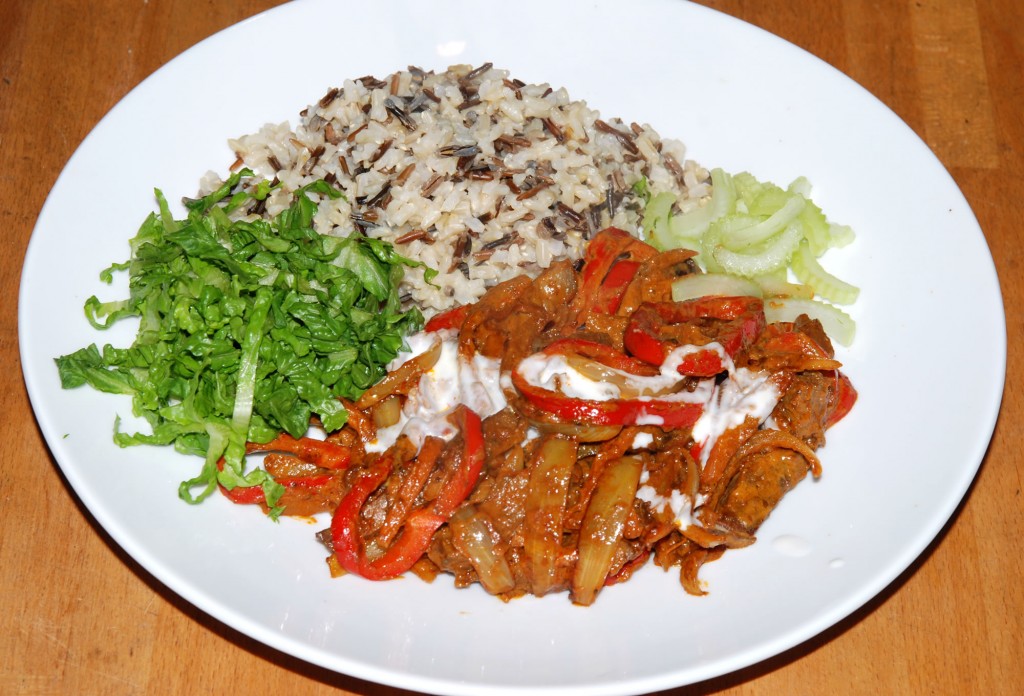 Strips of beef, cooked with onions and red peppers in a sauce of fried spices, tamarind, beef stock, red wine and chilli, served with shredded lettuce, celery and brown and wild rice, tossed with salted butter before serving 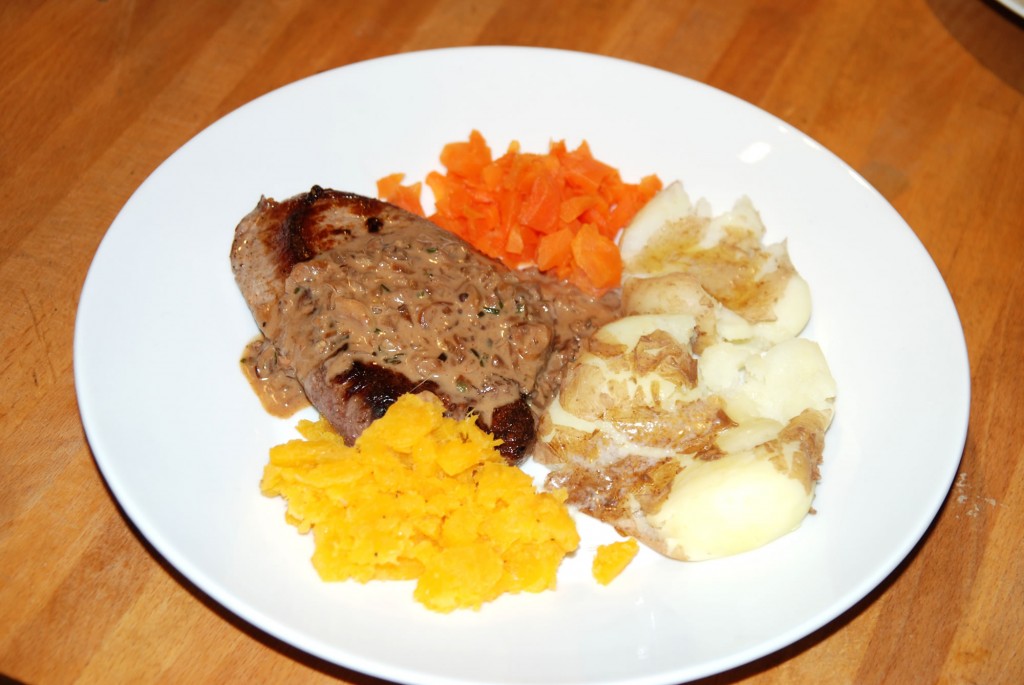 Sauce of shallots fried in butter with, ginger, garlic, anchovies, thyme, tarragon, smoked paprika and crushed white pepper, then mixed with cream, Worcestershire sauce and the meat juices, deglazed from the frying pan with red wine and brought to a simmer. 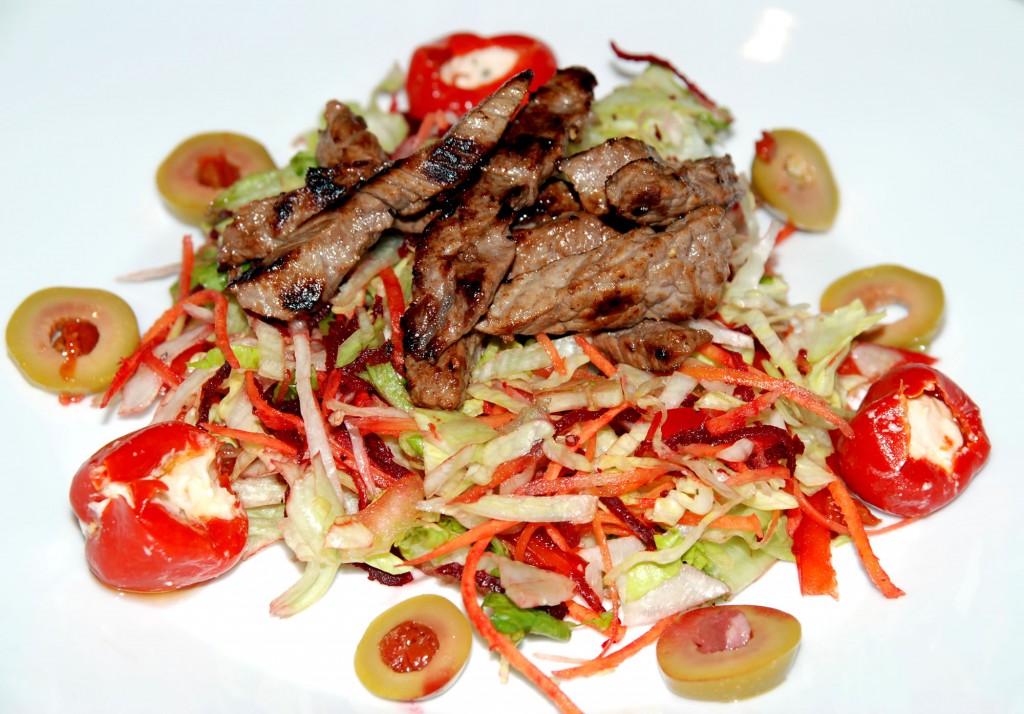 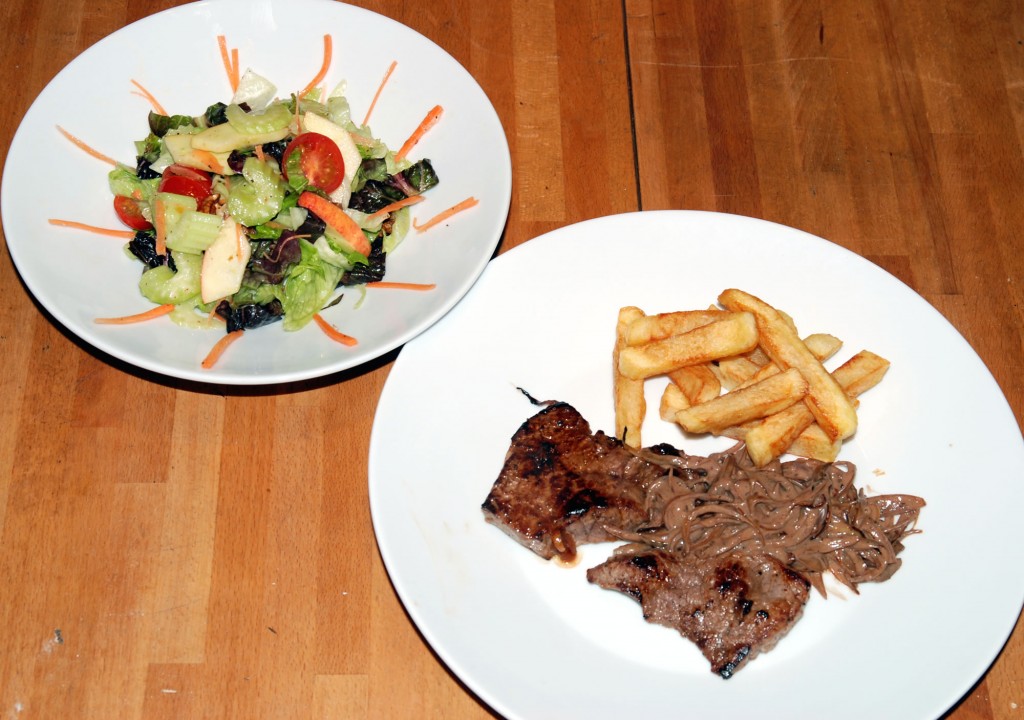 Bit of frying steak from our local butcher, with a salad of iceberg and red Little Gem, carrot julienne, cherry tomatoes, walnuts, celery and apple, in a lime juice and walnut oil dressing.  Onions fried with the steaks, then the meat was removed and rested while the onions were caramelised, then the pan was deglazed with a splash of wine.  Added a glug of cream and extra pepper and served on a nice hot plate with the salad separate. Triple-cooked chips, shole spuds microwaved for 3 mins, then cut into decent-sized chips and fried at 130C until blond, rested 10 mins then fried at 190C until golden and crunchy on the outside and fluffy inside. 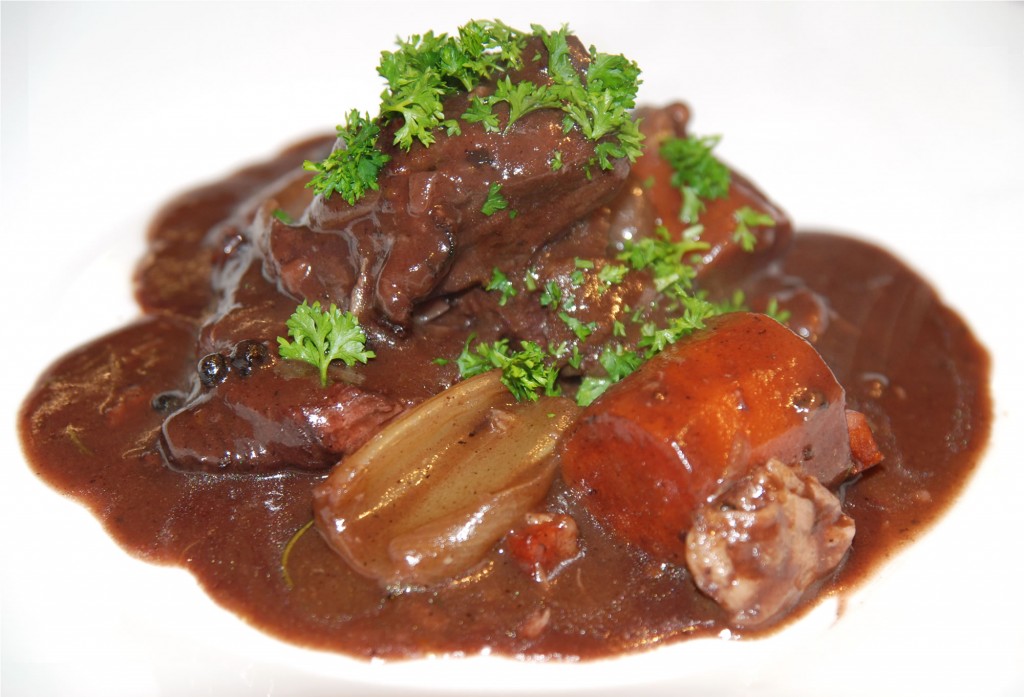 Lump of beef, cut into decent-sized chunks and marinated overnight with carrots, celery, onion and garlic. Marinade made by boiling 2/3 of a bottle of full-bodied red wine until reduced by half (light the vapour if you don’t mind losing eyebrows…), then adding half a pint or so of good stock, some crushed peppercorns, and plenty of thyme and rosemary.  The meat came out of the marinade after 20 hours or so, with a stunning deep purple colour.  Patted the meat dry, seasoned it with salt and pepper, then fried it in a little hot oil for 4 mins each side to give a bit of colour and flavour.  Meanwhile, baked a few tablespoons of flour in a baking tray for 11 minutes at 200C until it went straw/honey coloured.

When the meat was ready, put it on one side and fried the marinated vegetables for 10 minutes or so, stirring them around a few times. Sloshed in a bit of wine to deglaze the lovely sticky bits, then added the meat.

Mixed the flour with some of the marinade then stirred it into the rest. Brought the marinade to the boil to thicken it to the point where it was a sauce with a texture like pouring cream.  Poured the sauce over the meat and veg, brought just to the boil, then moved to the oven at about 110C for three or four hours, checking a few times to make sure it was only just on the point of bubbling.

When the veg are cooked and the meat is tender but not fallig apart, boil down the rest of the bottle of wine until it is about a third of its original volume.  Add to the cooking pot.

Fry a handful of 1 cm cubes of pancetta or streaky bacon until crisp.  Add to the cooking pot, along with a handful of chopped parsley, then serve with a simple starch like potato, pasta or bread. 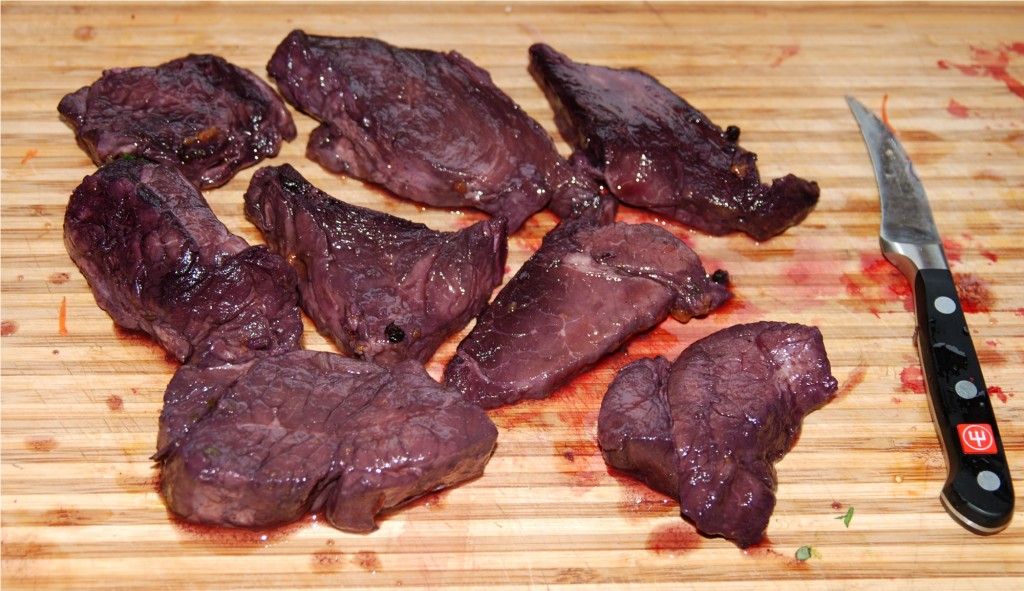 The meat, good and purple after its swim in the wine-reduction marinade 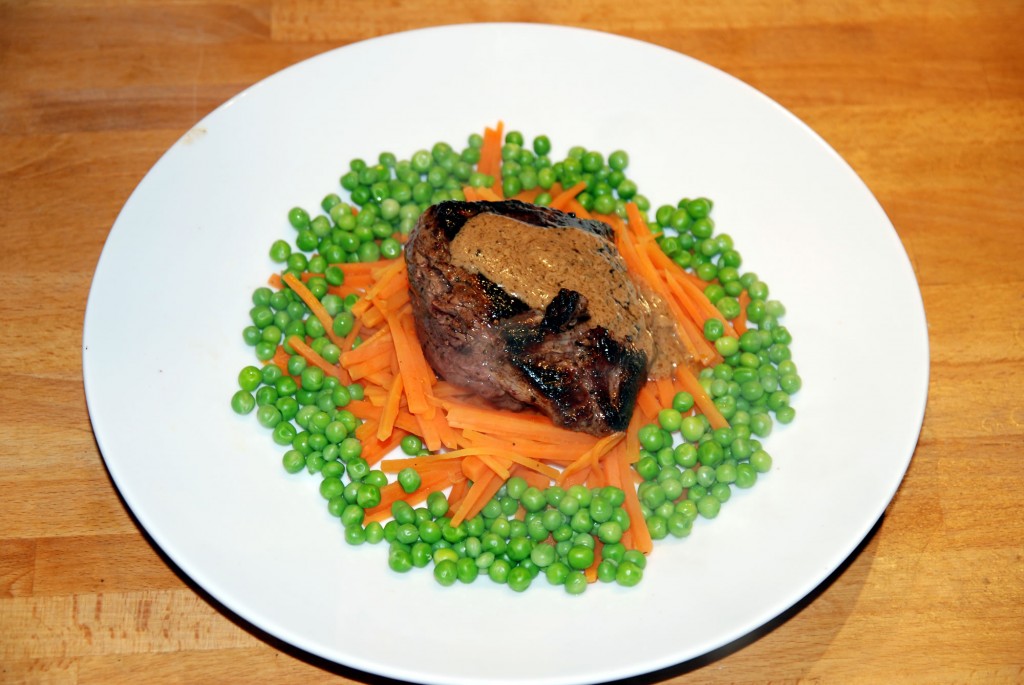 Fillet steak, seasoned, then fried 4 minutes each side in a lightly-oiled pan.  Bit of butter added for last 30 seconds.  Rested for five minutes on a warm plate. Sauce made by adding a splash of cream and a little of the carrot liquor and heating until slightly thickened, then adding the juice from the resting meat. Served with petit pois and carrot julienne simmered in apple juice until just starting to soften.