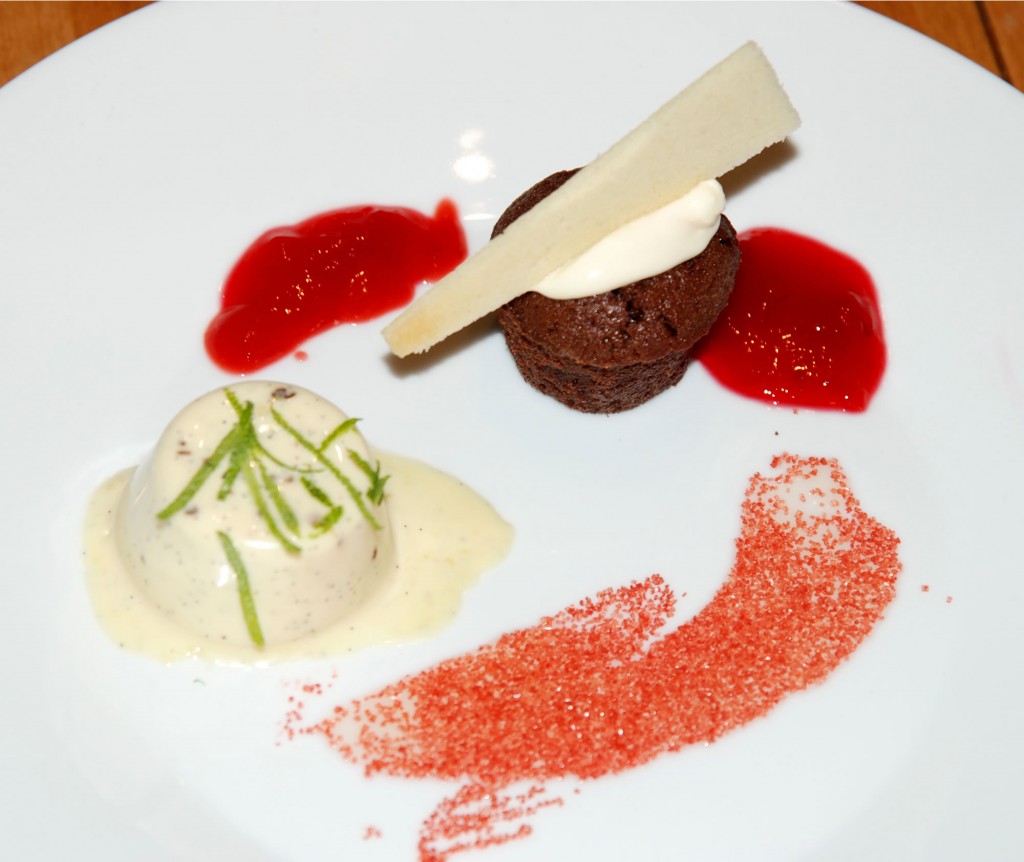 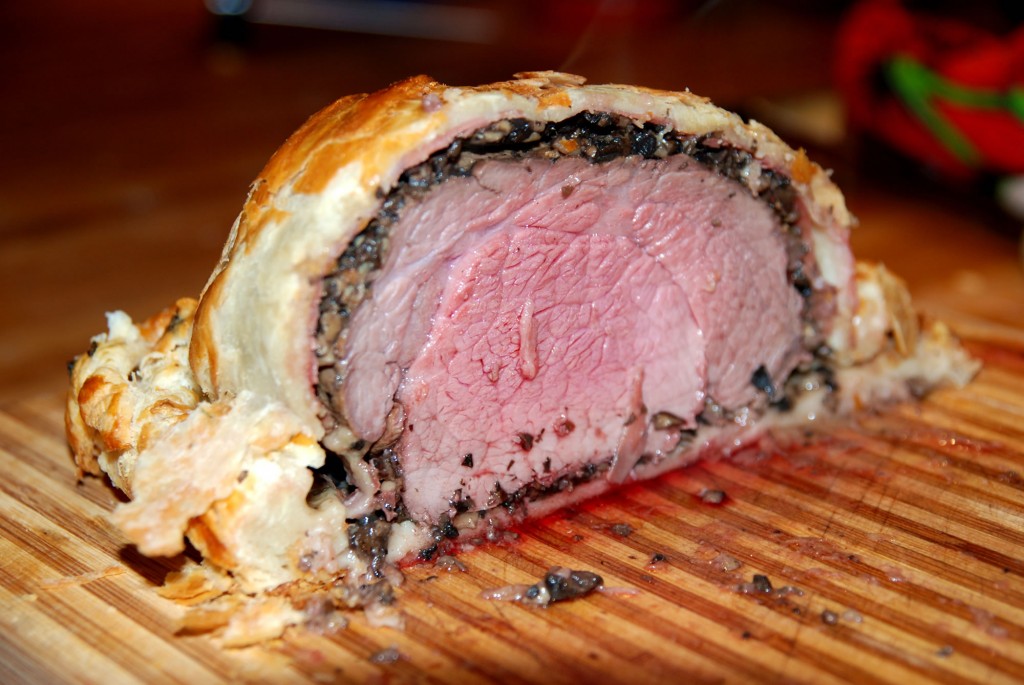 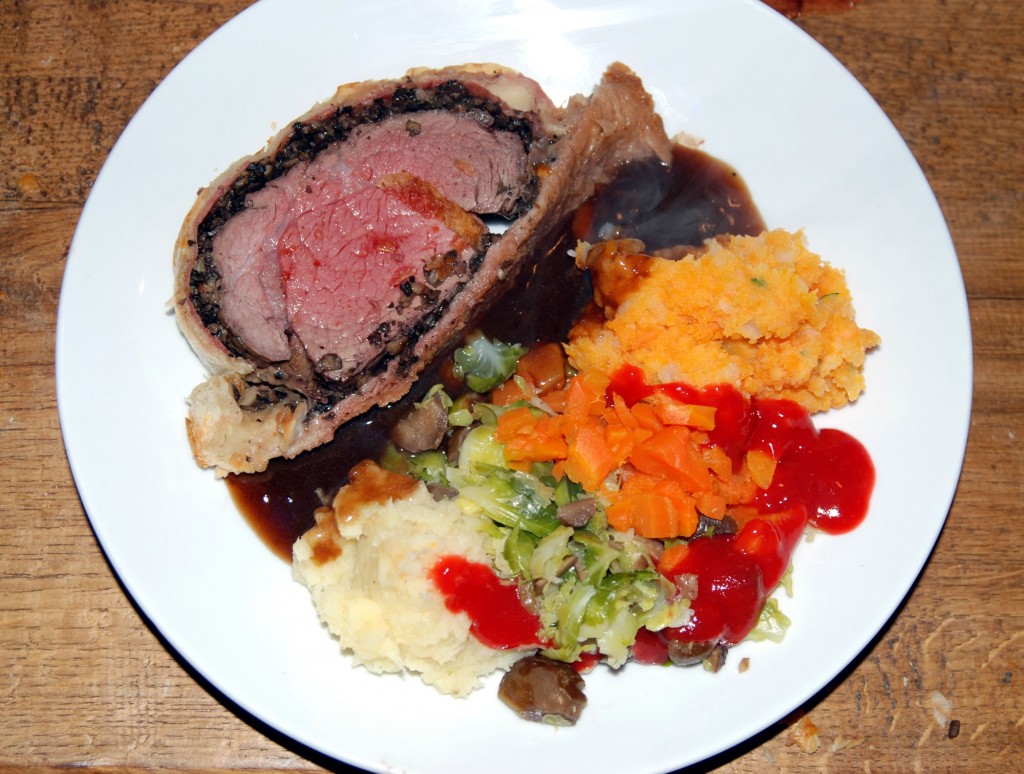 Call it retro, call it vintage, whatever.  Nice slab of local beef fillet, (1.2kg) seasoned and roasted at 220C for 20 mins, then chilled and rested.  Mushroom duxelle of finely chopped chestnut mushrooms, fried in a little olive oil, added half a glass of white wine and reduced to dryness.  Fillet massaged with salt and pepper and English mustard.  Rolled out puff pastry base.  Laid out clingfilm, with double layer of prosciutto, then layer of duxelle in centre.  Laid fillet on to duxelle, then coated rest of fillet and rolled into tight sausage with the clingfilm.  Rested for a while, then removed clingfilm and laid wrapped fillet on to pastry base.  Rolled out pastry top, well oversize.  Painted joining faces with beaten egg, sealed, ensuring no trapped air, then  rolled over joint and pressed with spoon handle to seal.  Marked pastry with curved incisions from back of a knife, then coated liberally with egg.  Baked for 30 mins at 190C in fan oven until golden, checked temp withmeat thermometer, 52 degrees at the core for a reasonably pink finish.  Rested 10 mins then carved into thick tranches.  Served with crushed parsnips, chopped carrots with herb butter, mashed potato and sweet potato, creamed together with parsley, chopped brussels and chestnuts.  Meat gravy and a tart and glossy plum sauce to finish. 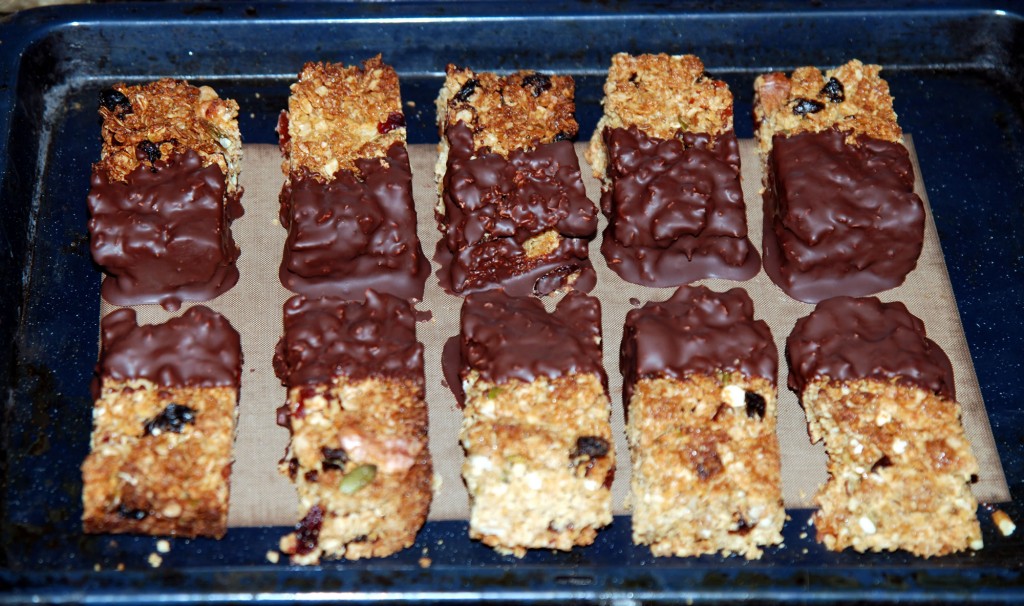 Another one of Nigel Slater’s recipes.  Caroline made these and they are rather fabulous. 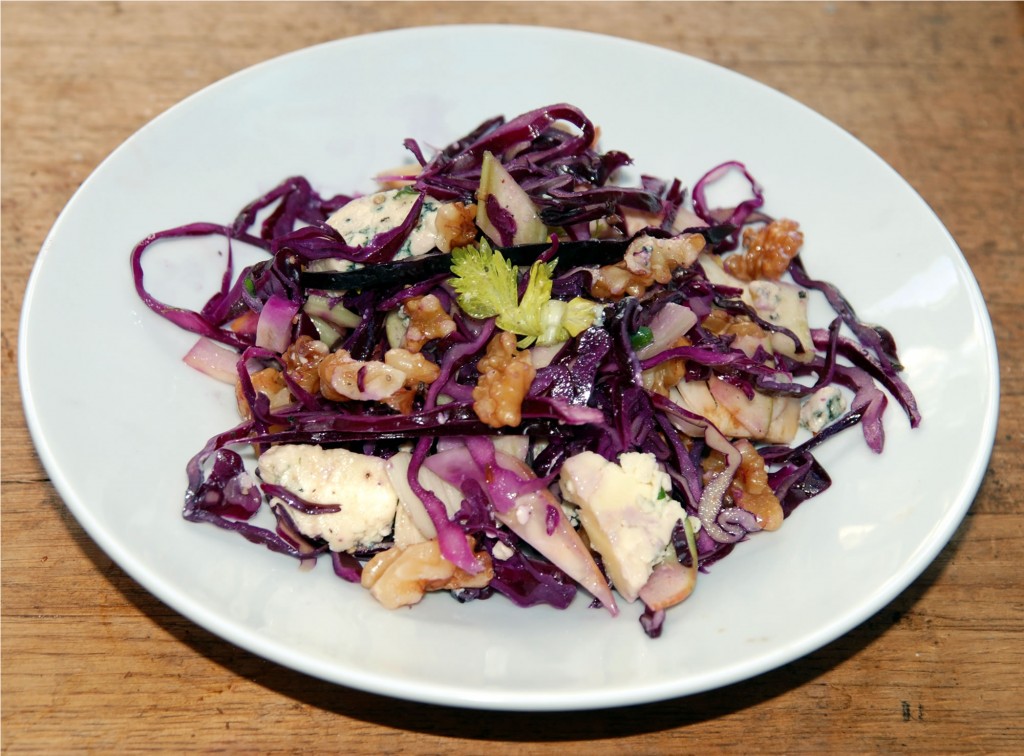 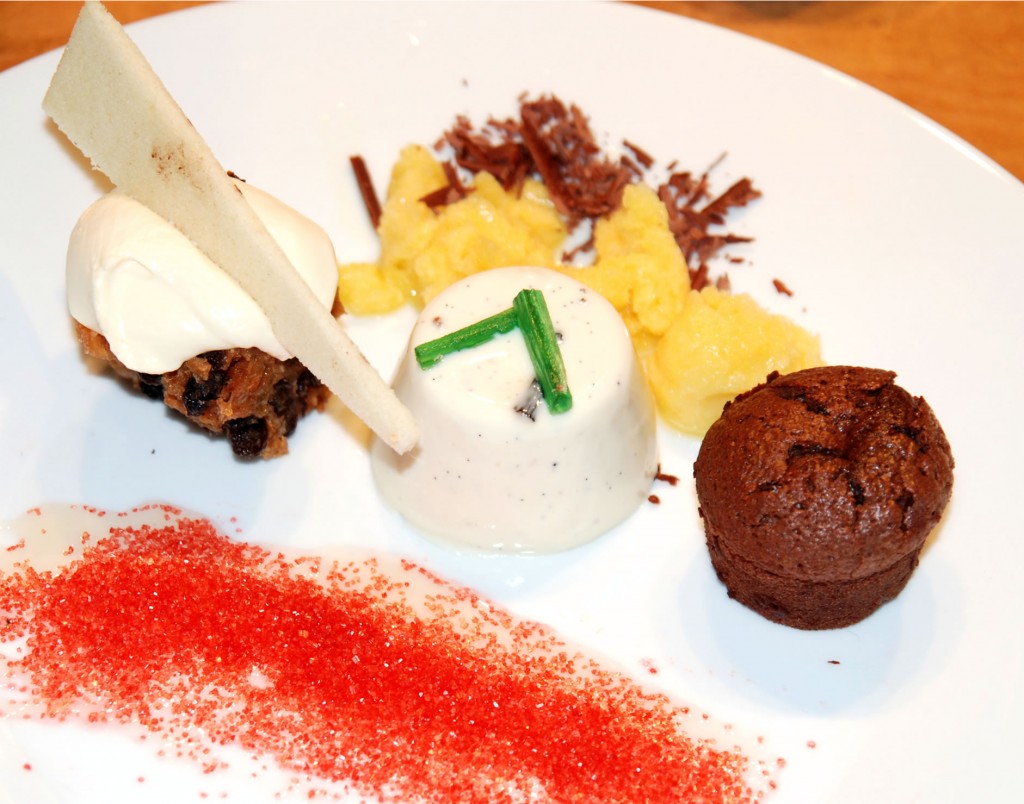 Christmas pudding, with brandy cream and a crunchy tuile, vanilla panna cotta with candied angelica, chocolate moelleux, with a core of molten raspberry chocolate ganache.  Orange sorbet with dark chocolate shavings, and red sugar on a smear of honey.

This was the sixth one, hence the choccy thumbprint on the tuile and the less-than-accurate smear of honey.

Tuile made with 40g butter, beaten with 50g icing sugar, then incorporated an egg white, finally folded in 40g sifter plain flour.  Smear the mix about 2mm thick on a silpat sheet and bake for 5 minutes or so at 180C.  Remove from oven and cut into shards, then cool on a close-spaced rack.

Core of moelleux is a ganache made with 75g raspberries, put through a fine sieve and mixed with 50g 70% chocolate melted over a bain-marie mixed with 20g double cream.  The resulting ganache was set into tiny silicone moulds about 20mm diameter and 15mm deep and frozen hard, resulting in solid pastilles.

The mix for the body of the moelleux used 60g butter melted into 100g of 70% chocolate over a bain-marie. 2 eggs were beaten into the mix, the 110g sugar and finally 40g sifted flour.  Final mix was beaten then put into a piping bag and piped into 45mm silicone moulds, about 1/3rd full.  A frozen pastille of ganache was dropped in and the moulds filled to about 80%, then cooked for 13 minutes at 180C.

Orange sorbet made by taking off the outer rind of two large oranges, making sure there was no white pith .  Juiced four large oranges, which gave about 300ml of juice.  Added juice of one lime, dropped in two star anise and the rinds, brough to the boil and simmered fof five minutes.  Put through a sieve, chilled and put into a pyrex bowl that had been in the freezer for a few hours. Soon as ice crystals started to form, set a timer to beat the mix every 20-25 minutes to ensure small crystals and a good texture.  Took 5 hours to get really good.

Chocolate planings made by using the side of a knife like a cabinet scraper.

I really wanted some pulverised dehydrated raspberries to make the smear, but had to make do with red-dyed sugar on a smear of honey. I won’t put the plates in the freezer next time, too much condensation….

Hot and cold and crunchy and smooth and sweet and bitter.  Not a teensy bit left despite all 8 guests having eaten pretty well all day. 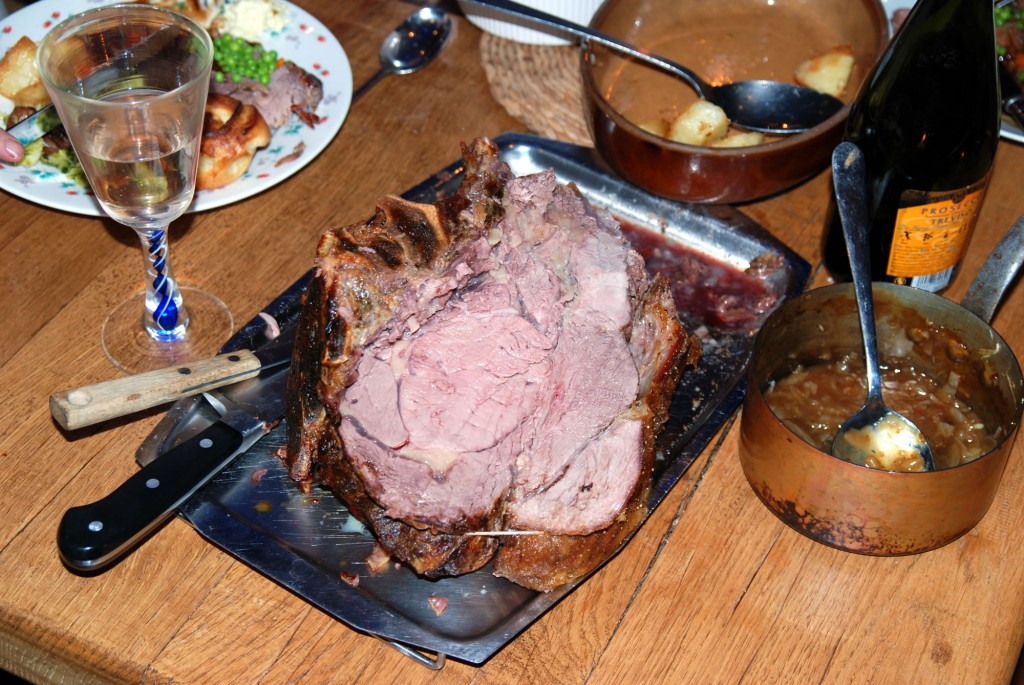 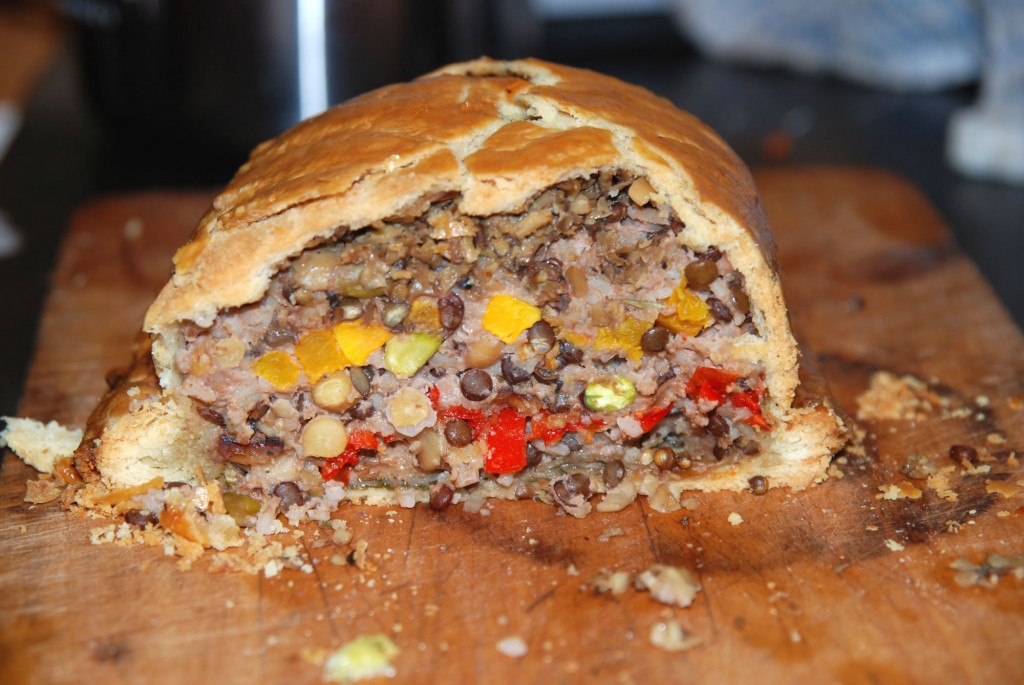 Duxelle of finely diced mushrooms, sweated and then deglazed with wine and reduced to near dryness.  Shortcrust pastry base, standing out by 2cm.  Terrine coated with duxelle, then covered with rest of the pastry and sealed. Marked with diagonal curves form the back of a kniife  Glazed with egg.  Baked for 40 minutes, served with vegetarian gravy. 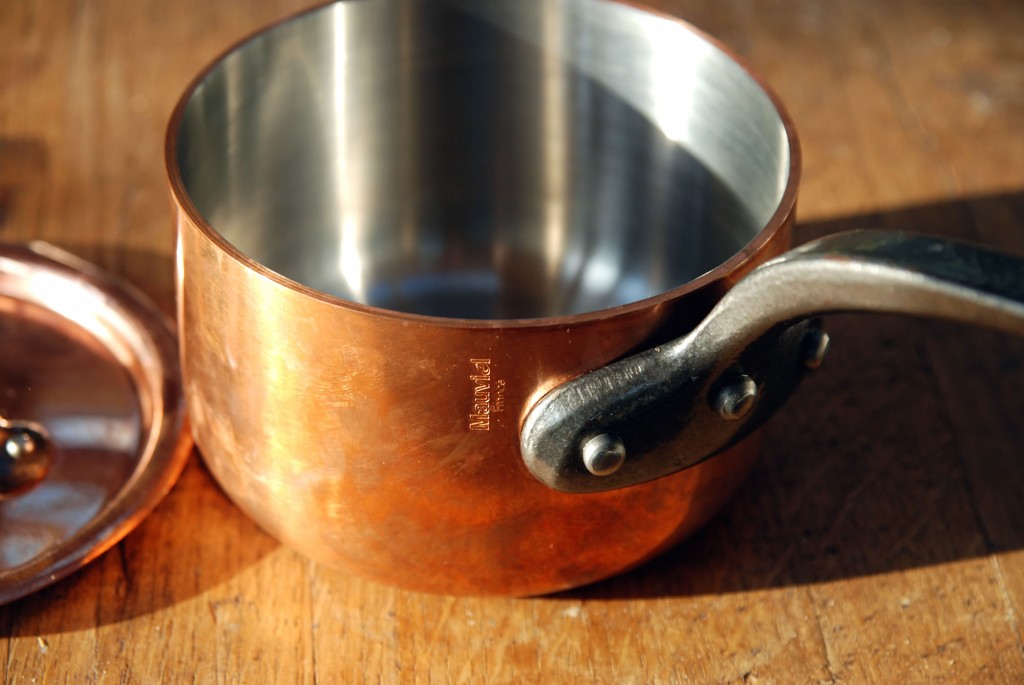 Treated myself to a Mauviel M’Heritage 12cm copper/stainless sauce pan. 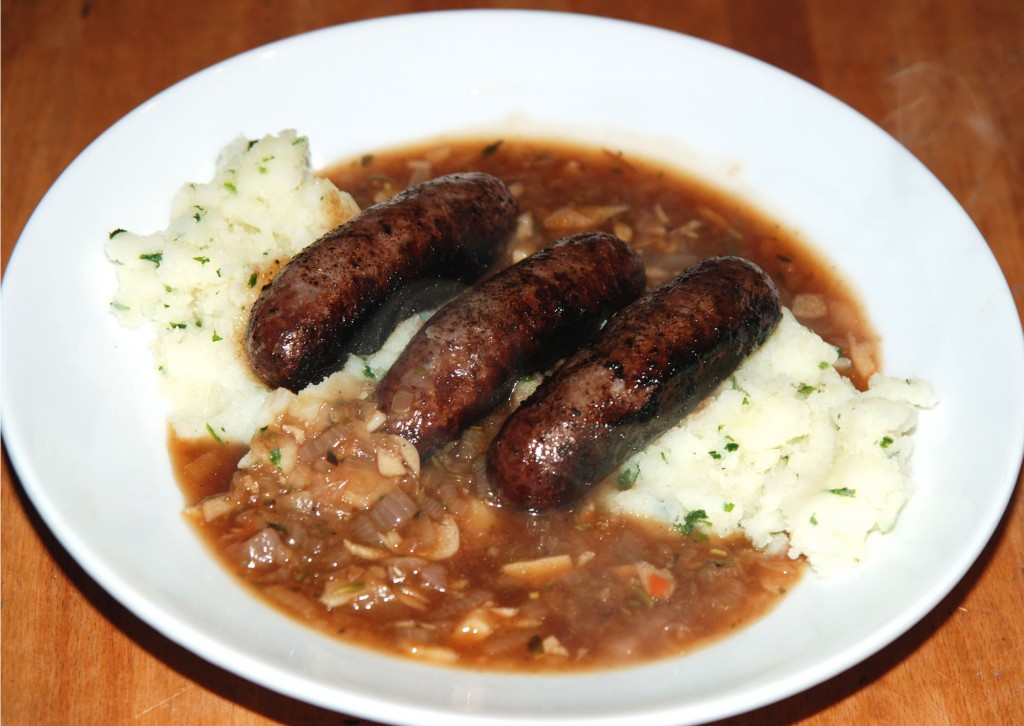 Venison sausages with herb mash and onion and garlic gravy 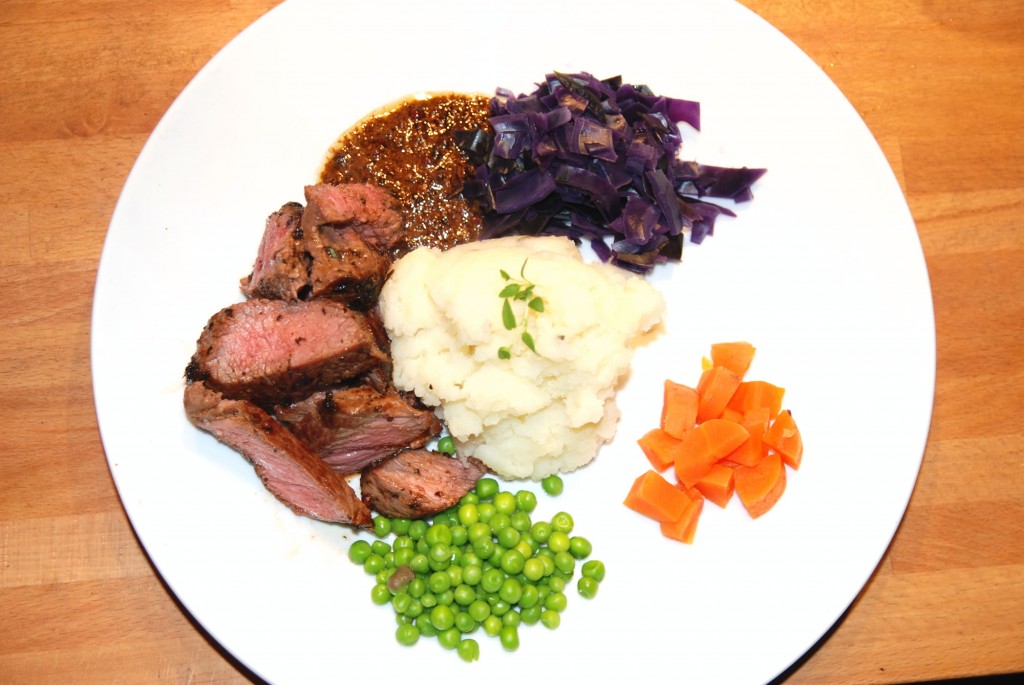 Fillet of rose veal, pan-fried with red peppercorns and herbs.  Rested and pan deglazed with sherry, then reduced with some cream.  Served with red cabbage, carrots, petit pois and creamed potatoes. Meat juices mixed with the sauce and served with some chopped thyme