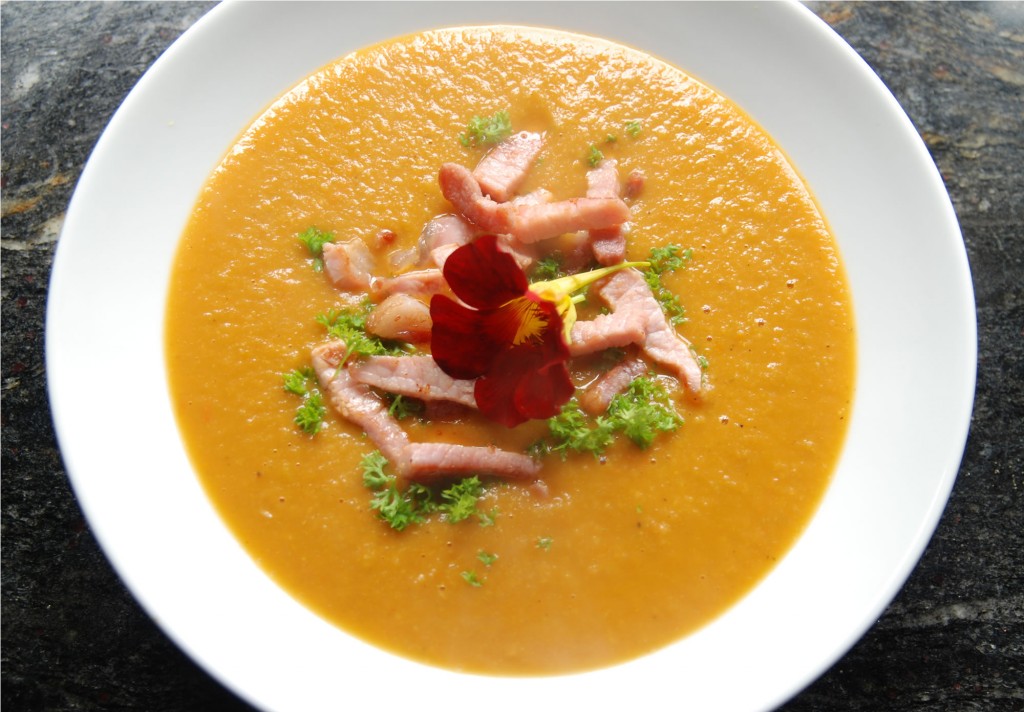 Soup of onions, carrots, celery, potato and tomatoes, with thyme and olive oil, finished with a little dot of butter and topped with crispy-fried bacon strips, parsley and a peppery nasturtium flower 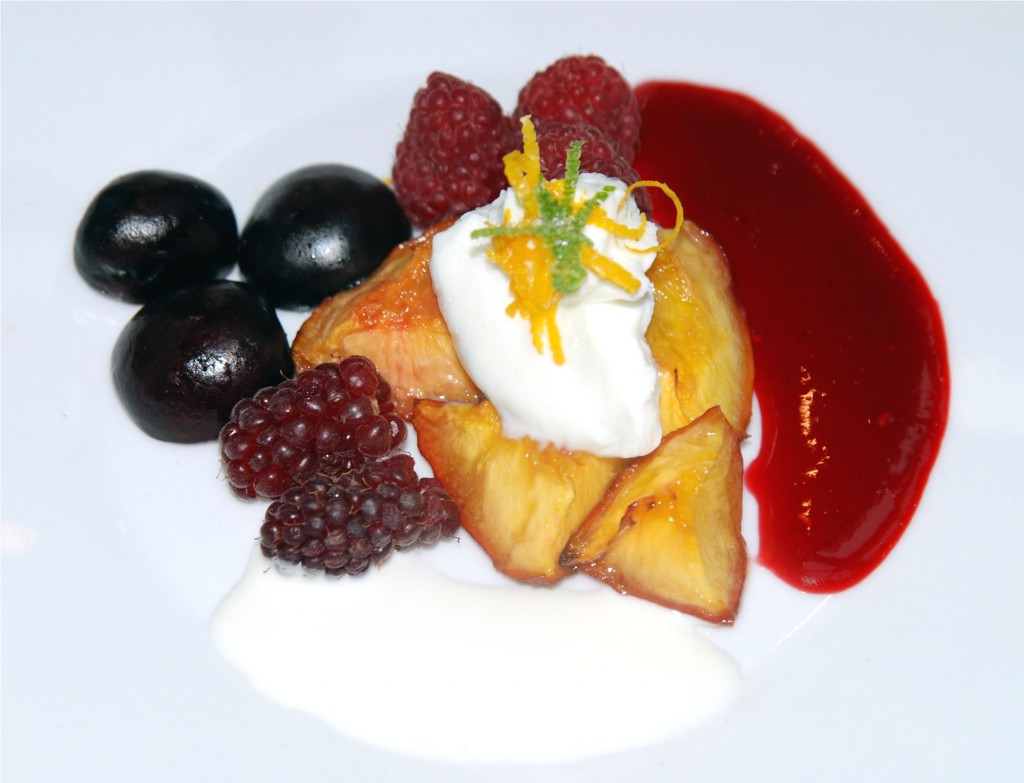 Roasted nectarines, drizzled with honey and caramelised for 25 mins at 200C.. Served with halved, stoned black cherries, fresh raspberries and loganberries, a raspberry coulis made with overripe fruit and honey, simmered for ten mins, then pushed through a chinois.  Topped with fromage frais and orange and lime zest. 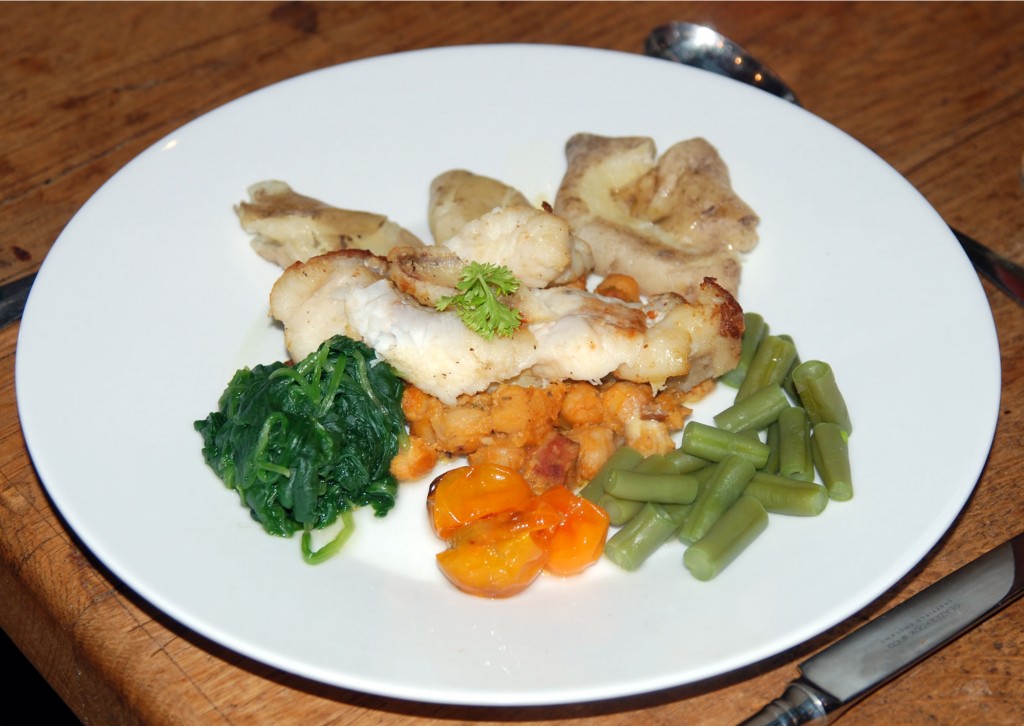 Chick peas,simmered with bacon, carrot and celery. A quarter of the chickpeas and some liquid roughly whizzed with some cream. Half a chorizo, simmered in water for two minutes, then drained, skinned and cubed and fried until sizzling and crispy.  Added the chickpeas with some of the cooking liquor and cooked gently,  adding more liquor to keep it moist.

Monkfish tail, filleted off the bone and fried until nicely browned, then roasted for 15 minutes in the oven. Rested, then sliced obliquely into thick tranches. Served with crushed, buttered new potatoes, wilted spinach, fresh French beans and cherry tomatoes roasted with rosemary and olive oil. 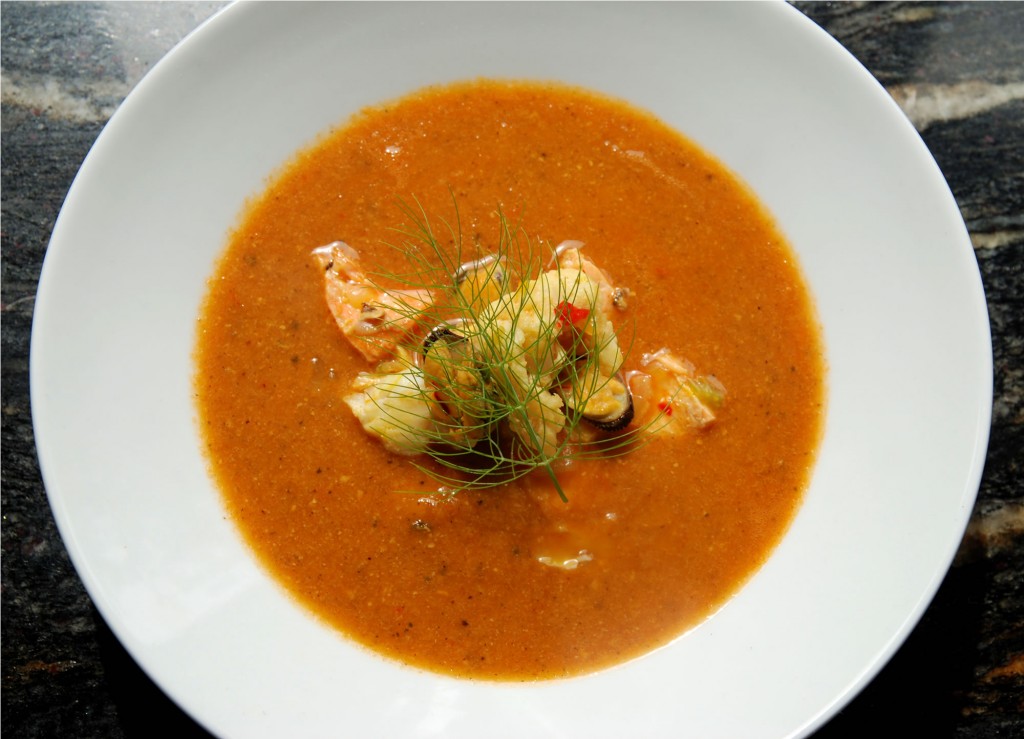 Mirepoix of shallot, celery and sweet pepper with a tiny bit of ultra-finely-diced carrot, sweated in olive oil until translucent.  Added paprika and crushed, chopped garlic, sauteed for a few minutes.   Added wide strips of orange zest peel, a chopped anchovy fillet, sea salt, black pepper and a generous pinch of whole saffron and left to infuse for a few minutes in a pint of fish stock that was nearly at the boil but not quite.  Added the stock to the main pan, brought to a slightly wobbly stage, not quite simmering.  Added bits of fish, in walnut-sized chunks.  Kept at non-quite-simmering for five minutes.  Added pre-cooked mussels and a drained tin of smoked mussels.  Left at the same heat for another two minutes, then scooped out most of the big pieces of fish and some of the mussels. and left them to drain in a colander.  Brought the remaining liquid and bits to the boil and skimmed off the foam a few times. Added a pile of fresh chopped tomatoes and a decent glug of passata, simmered gently for ten minutes then given a final skim then blitzed with a stick blender.

Served in wide pre-heated bowls with a selection of fish pieces and mussels in the middle and a bit of dill weed. 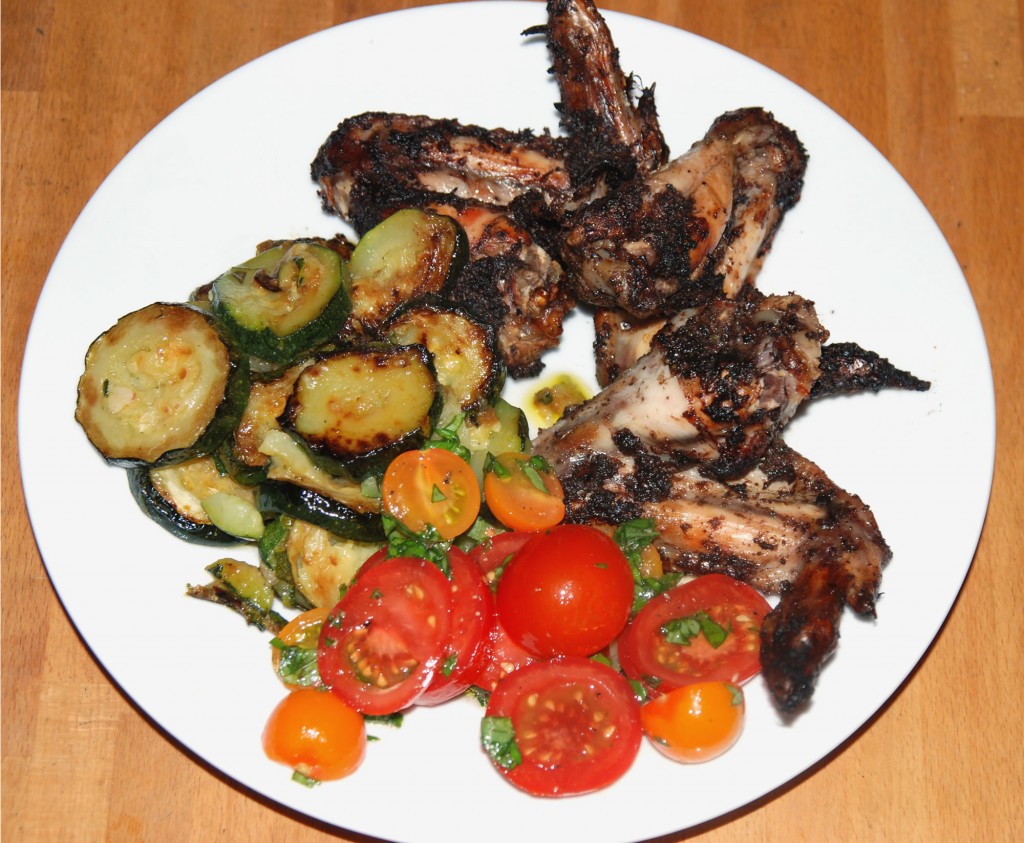 Jerk chicken wings with Caroline’s secret home-made jerk seasoning, with tomato salad made with the first of the tomato crop and fresh basil, served with courgettes from the garden fried with garlic.

Now all I need is her to make peas’n’rice and ackee and saltfish. 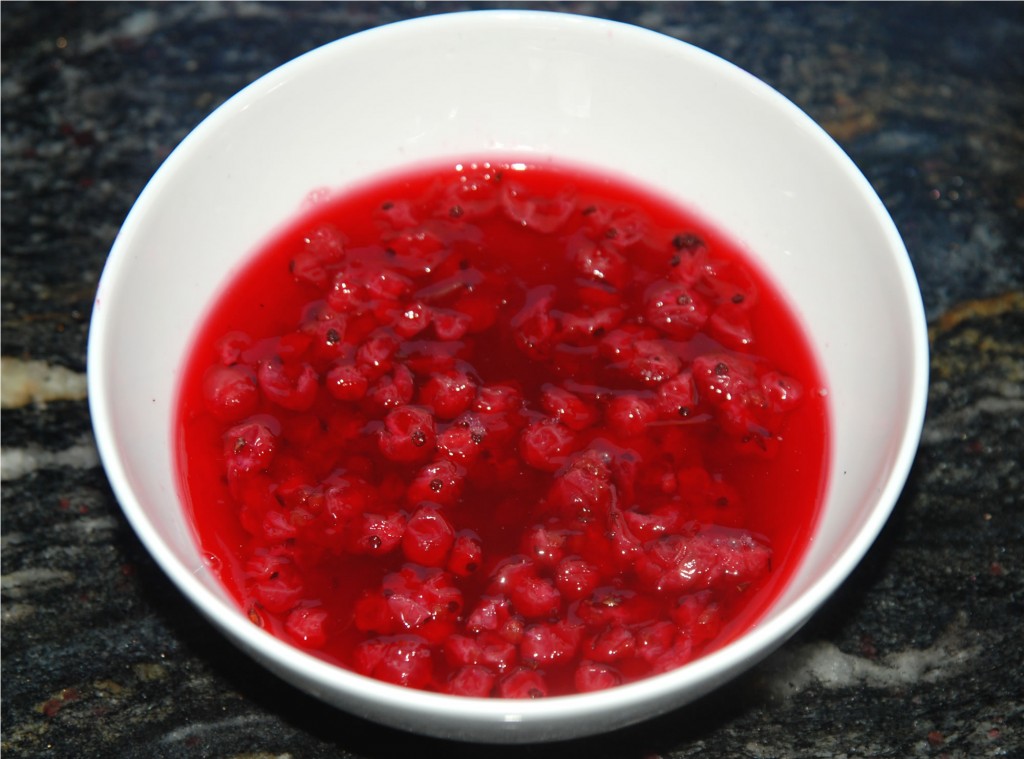 Fresh redcurrants from Caroline’s fabulous bird-proof fruit cage, simmered with sugar, then drained. Syrup mixed with gelatine powder and poured into bowls with the fruit and left to set to a glass-clear, densely-coloured and brittle jelly 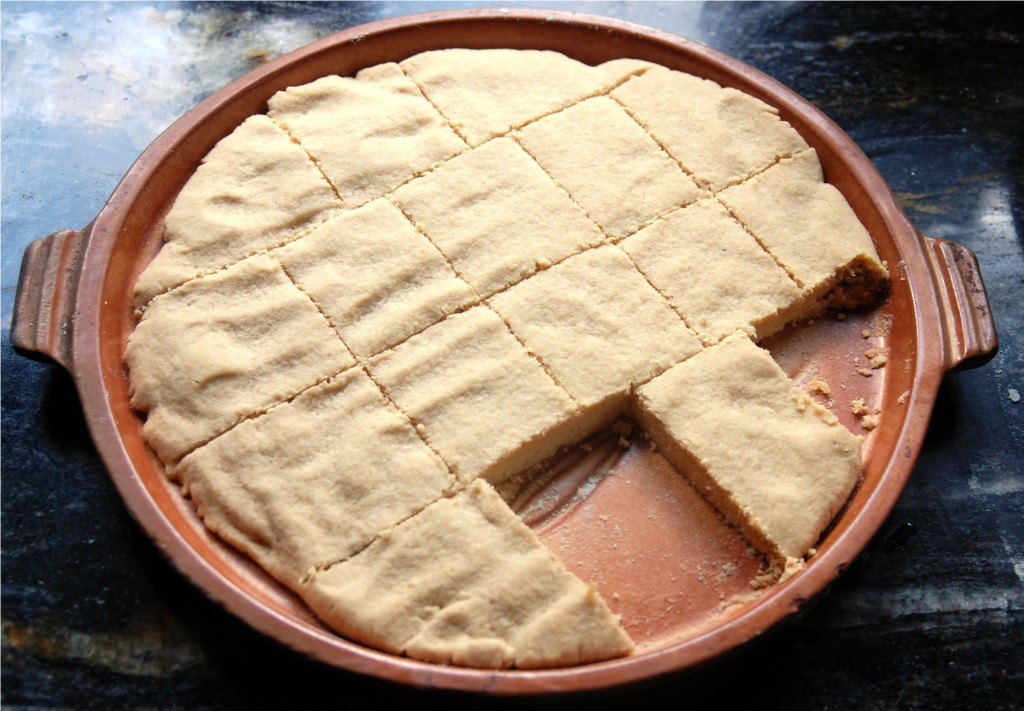 Caroline made this scrummy shortbread 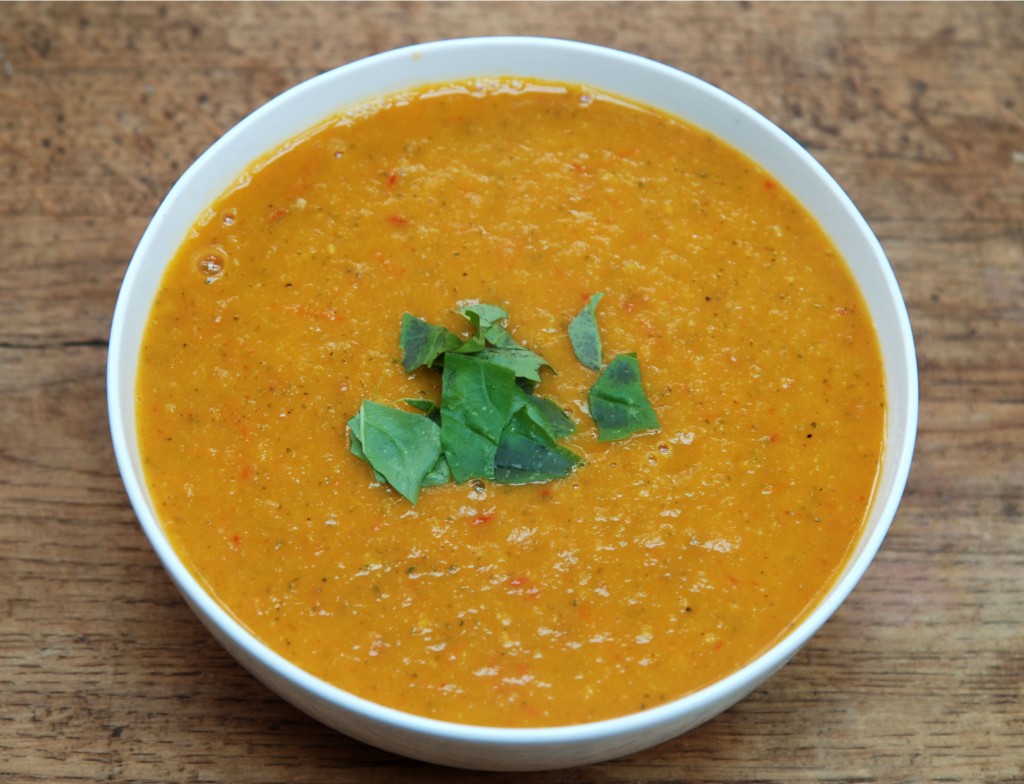 Onions, garlic and sweet pepper, sweated in olive oil with lots of thyme and marjoram. Chopped courgettes and frozen cherry tomatoes added, topped up with a bit of stock, simmered, then blitzed.  Served with torn fresh basil leaves 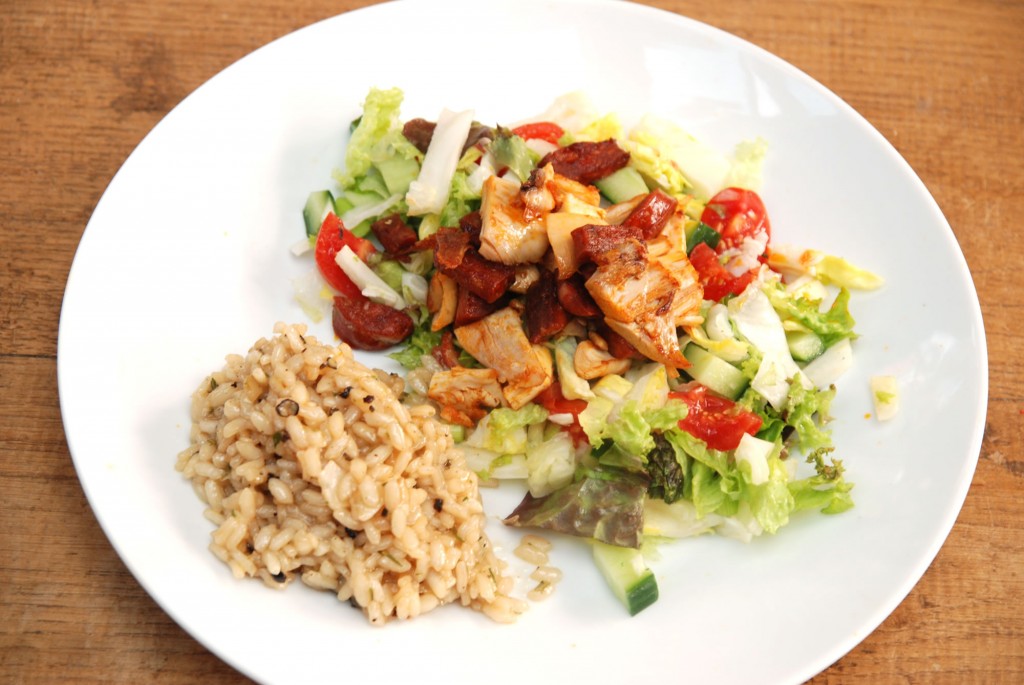